Seth wrote this post on his blog: “Eleven things organisations can learn from airports” its a list of 11 things that Airports do wrong, and I feel that it all too often applies to the UK rail network

1. No one is in charge. The airport doesn’t appear to have a CEO, and if it does, you never see her, hear about her or interact with her in any way. When the person at the top doesn’t care, it filters down.

While the TOCs have their own management, and Network Rail has its own management, while if a train is delayed a small army of “Delay Attribution Officers” [ref] are mobilised to pass the buck:

Around 300 “Delay Attribution Officers” have been hired by the rail firms and Network Rail, which manages the network’s infrastructure. When delays take place, they find someone other than their employer to blame, and thereby avoid paying compensation. It is estimated this method – aided by lawyers working alongside them – deprives commuters of millions of pounds in delay repayments. According to the latest figures, train firms received a total of £450.3million in subsidies from the taxpayer last year. The number of DAOs was unearthed by reporters working for a television documentary.

However when a train is delayed as a customer you have to fight for your rights to a refund as set out under The National Rail Conditions of Carriage Part 1 §H.42 Compensation for delays

(a) Where delays, cancellations or poor service arise for reasons within the control of a Train Company or Rail Service Company, you are entitled to compensation in accordance with the arrangements set out in that Train Company’s Passenger’s Charter. This can be obtained from the relevant Train Company’s ticket offices, customer relations office and internet sales site.

(b) The amount of compensation offered by each Train Company in its Passenger’s Charter varies from Train Company to Train Company. However, if you arrive more than 60 minutes late at your destination station you will, as a minimum, be entitled to compensation in the form of travel vouchers in accordance with the table below:

And if they don’t want to give you a refund, well they get to play about with timings and blaming:

The firms also get around the issue by averaging the punctuality figures for their entire operation.

This means that lines which are performing well can hide regular under-performance on other routes.

Another factor in the firms’ favour is the largely secret “working timetable”, which allows trains a “window” of arrival, in which they are actually late but can be considered to be technically on time.

In this way, long distance trains can arrive 10 minutes after their timetabled schedule and yet still be on time for the purposes of compensation. Shorter distance trains have a five-minute window.

A further tactic is the method for tallying late trains: a train is only counted as late if it arrives at its final destination beyond this window – late arrivals at intervening stops do not count. [Ref Telegraph Article]

Also of note is this that I received as part of an email in relation to delays incurred due to #TrainOnFire / #SalfordCresent [details] from First TransPennine Express “we do not offer compensation for consequential losses as the result of a delay or cancellation of rail services.” where a train that I was planing to use was canceled; consequently meaning that I was late for my connecting journey with a different TOC (as such they didn’t delay me by more than 60 minutes, but my journey was).

2. Problems persist because organizations defend their turf instead of embrace the problem. The TSA blames the facilities people, who blame someone else, and around and around. Only when the user’s problem is the driver of behavior (as opposed to maintaining power or the status quo) things change.

All the TOCs are happy to blame each other, Network Rail, or the Department of Transport, or indeed Passengers, however they never listen to Passengers, this was recently shown again when First Great Western advertised a “Tweet a Manager” on Twitter, however suffered amnesia about any problems previously raised with them:

The full back and forth can be found here, however I have inserted some of it here:

So Despite years of people complaining about the conditions the best they can do is ask people to repeat what they have been saying, and they can hope that it is listened to this time?

3. The food is aimed squarely at the (disappearing) middle of the market. People who like steamed meat and bags of chips never have a problem finding something to eat at an airport. Apparently, profit-maximizing vendors haven’t realized that we’re all a lot weirder than we used to be.

Not only are we a lot weirder than we used to be; we don’t like being ripped off at £2.60 for a cup of hot chocolate (Costa Manchester Piccadilly platform 13/14).

4. Like colleges, airports see customers as powerless transients. Hey, you’re going to be gone tomorrow, but they’ll still be here.

The number of people on the train with me who don’t have season tickets (even at commuter times) suggests that season ticket holders are not as common as people who either buy tickets at walk up, or in advanced; as such it looks like they assume that people wait until they forget how bad trains are before they come back.

5. By removing slack, airlines create failure. In order to increase profit, airlines work hard to get the maximum number of flights out of each plane, each day. As a result, there are no spares, no downtime and no resilience. By assuming that their customer base prefers to save money, not anxiety, they create an anxiety-filled system.

By removing slack TOCs often have delays that are directly attributable to their failure,

6. The TSA is ruled by superstition, not fact. They act without data and put on a quite serious but ultimately useless bit of theater. Ten years later, the theater is now becoming an entrenched status quo, one that gets ever worse.

Occasionally you see people with guns wondering around, quite frequently you have police walking around, and often you will see PCSOs walking around, This mainly happens at High Profile stations, Out side of these stations what is hard to find is any help if you have problems, the most railway staff on stations are there to check that you are not trying to travel without a ticket, or the dispatch staff for the trains.

Most Mainline stations have had bins and postboxes removed as a response to the IRA’s (Irish Republican Army) mid 80’s mainland Briton bombing campaign, and have failed to put them back, continuing to cite “Security” the same Safety and Security that  means that there is 24 hour CCTV in operation at the station, (and if you see anything suspicious you will need to report it to staff or security services). however the result is that COSTA, Starbucks, McDonalds, and Burger king have free advertising all over the place, as cleaning staff are few and far between.

7. The ad hoc is forbidden. Imagine an airplane employee bringing in an extension cord and a power strip to deal with the daily occurrence of travelers hunched in the corner around a single outlet. Impossible. There is a bias toward permanent and improved, not quick and effective.

I know First Great Western sometimes have a band playing on the lawn at London Paddington, but that is still not ad-hoc, ad-hoc would be staff helping customers, even the bible of doom has this to say on Staff being helpful:

So unless the NRCOC expressly allow it (oh and the things they do allow is limited) then the staff member has no authority to try to help you. (and while your wondering about other T&Cs that apply the other Document is the Railway Bylaws (Made under Section 219 of the Transport Act 2000 by the Strategic Rail Authority  and confirmed under Schedule 20 of the Transport Act 2000 by the Secretary of State for Transport on 22 June 2005 for regulating the use and working of, and travel on or by means of, railway assets, the maintenance of order on railway assets and the conduct of all persons while on railway assets). Given that  can you guess how friendly they are to passengers?

There is one document that is put in place to give you some rights and standard level of service, and that is the TOCs Passengers Charter, however my daily commute can be made using a combination of 5 different TOCs; Cross Country, East Midlands Trains, First Transpennine Express, Northan Rail, and or Virgin Trains. Each TOC has a different Passengers charter, and again see §1 and §2 of this post for how fast they pass the buck, rather than take ownership of any problems that occur.

8. Everyone is treated the same. Effective organisations treat different people differently. While there’s some window dressing at the edges (I’m thinking of slightly faster first class lines and slightly more convenient motorized cars for seniors), in general, airports insist that the one size they’ve chosen to offer fit all.

As does the entire rail network; ok so there are some “Priority Seats” but in general the seats are too small for everyone above the age of 15 to sit on comfortably.

9. There are plenty of potential bad surprises, but no good ones. You can have a flight be cancelled, be strip searched or even go to the wrong airport. But all possibility for delight has been removed. It wouldn’t take much to completely transform the experience from a chore to a delight.

It wouldn’t take much, perhaps some better leadership from the top, and complaints being listened to, however looking at the history of improvements; very little seems to be aimed at making the experience more “delightful”, they seem to be more interested in shaving a couple of minuts of a journey, rather than improving the comfort of that journey (perhaps so stock can make more journey per day?).

10. They are sterile. Everyone who passes through leaves no trace, every morning starts anew. There are no connections between people, either fellow passengers or the staff. No one says, “welcome back,” and that’s honest, because no one feels particularly welcome.

All the surfaces at a station are wipe clean, and easy to reset.

And the staff look like they don’t care about your problems, all the announcements have been automated, and a robotic voice is sorry for the delay, and that travailing on the wrong train is a finable offence.

As we see at many organizations that end up like this, the airport mistakes its market domination for a you-have-no-choice monopoly (we do have a choice, we stay home). And in pursuit of reliable, predictable outcomes, these organizations dehumanize everything, pretending it will increase profits, when it actually does exactly the opposite. 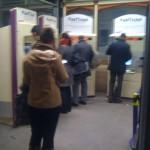 UPDATE: She has been Found. While I was at work today, some un kind person stole Steph (S85STF) from Gloucester Street, on […] 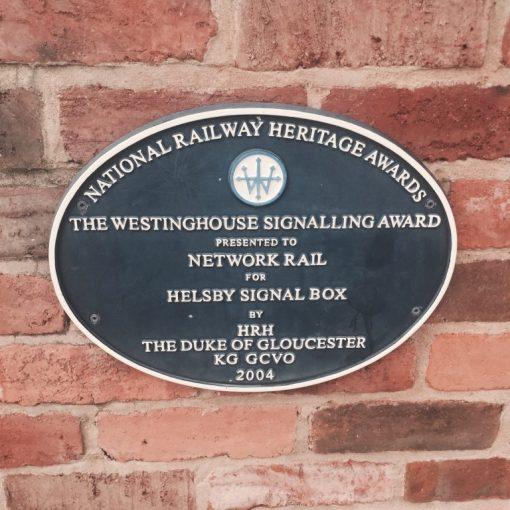 On the way back from the Model Boat Show, I had to change trains at Helsby station. Helsby has a Traditional signal […]